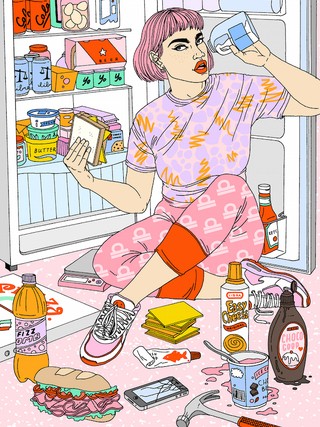 “For us, art is not an end in itself … but it is an opportunity for the true perception and criticism of the times we live in.” (Dada poet Hugo Ball)

After her Graffiti Debate lesson plan series, Vicky Papageorgiou is sharing with us her second lesson plan series for the Visual Arts Circle. Social Inequalities is a mini course teaching students how to prepare oral presentations using contemporary artists as an incentive. The target group is students over 16 years old and the level is B2+ . In total it lasts about  8-9 teaching hours. This is why the whole series will be posted in 3 parts (First : lesson plan 1, Second : lesson plan 2 and Third : lesson plan 3 & 4 together).

Part of this course has been based on specific transformative methods by Kokkos and by Perkins, employing critical thinking techniques and reflective methods to motivate learners to consider and reconsider their views on modern social matters and hopefully to lead them to change through art.  All the artworks used have been carefully selected among works by contemporary artists from a variety of countries who use a variety of artistic media to address and comment on these inequalities through their work and who have also tried to make these problems more relatable to the public.

We hope you find interesting the first part of this mini course. Stay tuned for the next parts until it is complete. In the meantime, we invite you to leave your comments if you wish.

All the supporting documents for the 1st Lesson plan can be found below : 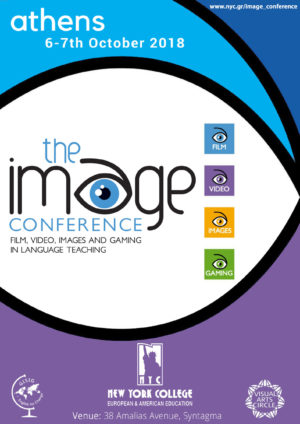 The seventh edition of the Image Conference, the annual conference of the Visual Arts Circle, was held on 6th and 7th October at New York College, in Athens, Greece. The Department of English Language and Language Teaching of New York College, Athens hosted  and co-organised this international conference, offering educators in Greece a unique opportunity for focused, high-quality professional development.

The two key aims of the conference were to put media and images at the centre of the language learning agenda, and to offer guidance on using media and images critically and creatively in language teaching in the age of the Internet. It is always an excellent opportunity for like-minded from all over the world to meet and exchange ideas.

On Friday night already, several of us had arrived for a warm and welcoming pre-conference event at the venue. Having a drink, seeing old friends and colleagues, chatting was an incredibly pleasant experience.

The next morning, Kieran Donaghy opened the Conference .

The Conference kicked off with Magdalena Brzezinska’s workshop ‘Can you feel what I feel?’ followed by Tyson Seburn’s ‘Video Oxymorons’.

like Jade Blue and Hania Krystyna Bociek and Ben Goldstein

Other colleagues presented, of course, too….

The day ended with Kieran’s and Chrysa Papalazarou’s plenary talks at the College’s yard!

However, that was not enough! A dinner party at a taverna was to follow shortly after! 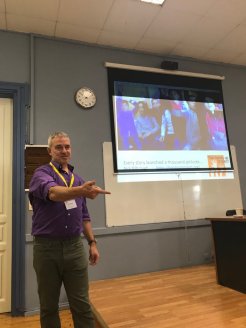 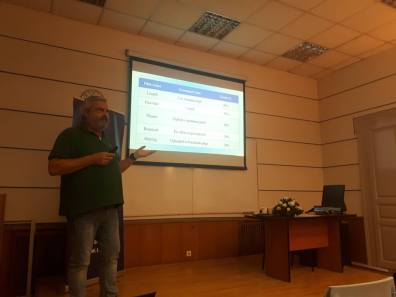 It was two wonderful days full of interesting talks, a lot of bonding with colleagues, networking and a delightful opportunity to spend a few days in sunny Athens, of which everyone took advantage of even during the breaks. 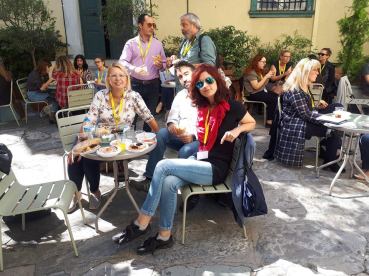 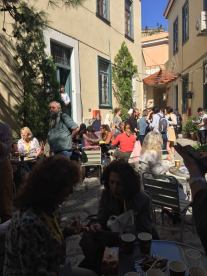 The Conference closed with Anna Whitcher’s training session ‘Language learning through video creation ‘ and Daniel Xerri’s plenary on ‘Making the Most of the Multicultural Classroom through Multimodal Resources’.

On the last day, too Emma Louise Pratt interviewed people out in the yard and you can listen to their reflections here .

And the announcement that next year the Image Conference will be hosted in Brussels! Until then….. we will be in touch!

Last April, Margarita was invited to speak at the IATEFL GISIG/VAC PCE session. You can read all about her presentation in this post :

Inclusion and integration of various social groups is a commonly discussed topic in contemporary society. Therefore, since this topic is of general concern, it should also be addressed by educators, even (or especially) those involved in English Language Teaching. Despite its urgency, the practice of incorporating social issues into ELT still has some opponents. Film in the English language classroom is one way to do this.

Film : a useful tool for tackling with ‘difficult’ topics in the English language classroom

One of the recurring arguments provided by those more sceptical is that tackling “difficult topics” in class can lead to disputes and unnecessary tension, especially that many English language instructors are not trained to deal with such situations. It can be argued, however, that film can become a useful tool in the hands of educators. Film is unique in a sense that it allows students to make connections between their personal lives and the people and events on the screen, and to develop high levels of empathy. Therefore, approaching global issues through feature film, documentaries, or short inspirational videos, is an effective strategy. Thanks to its audiovisual nature and authentic appeal, film brings real life into the English language classroom providing a context in which the language is learnt, the students are motivated and the difficult issues are discussed with more confidence and ease. Moreover, cinema, be it a feature film, a documentary, or a short inspirational video can satisfy the sense of curiosity and the need for knowledge. It also teaches to think critically and to evaluate facts, events, and opinions. In this way, by developing in the viewers the competences of cultural and social understanding, film brings people from various backgrounds together. 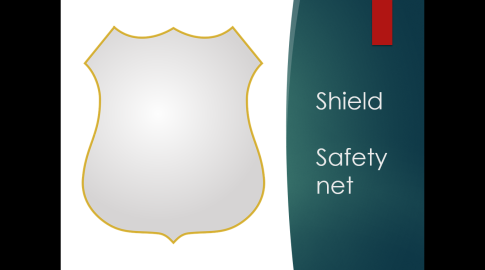 Another advantage of using film to discuss “difficult topics” is that focus is shifted from the learners and their attitudes to the movie characters. There is no finger pointing; just reflecting. Thus film, which acts as a shield or a safety net, allows viewers to get into the shoes of the protagonists and reshape their ideas and beliefs.

The Power of Film

The power of film can be discussed on the example of Garth Davis’ Lion (2016) starring Sunny Pawar as a five-year-old Indian boy named Saroo, and Dev Patel in the role of adult Saroo Brierley. By an unexpected turn of events, the little boy finds himself on an empty train, falls asleep and gets carried 1600 km away from his family and from his home to the city of Kolkata (formerly called Calcutta). Lost, scared and hungry, Saroo wanders the streets of the city looking for shelter and food, and a way to get back home. His search continues for many years.

The film tackles a number of issues which can be effectively transferred into an English language classroom. Without revealing much of the plot, it can be mentioned further that Lion stimulates viewers to consider many questions related to seeking one’s identity and going back to one’s roots: questions such as ‘Where is home?’, ‘Can we be happy away from home?’, ‘Who is family?’ or ‘Can we be happy without knowing our roots?’ reverberate throughout the duration of the narrative. What makes Lion so relevant is that an individual’s desire to know who s/he really is, the urge to be close to home and to the beloved ones are among the issues troubling many people nowadays forced by war and persecution to leave their homeland and seek safety elsewhere.

Except for feature film, documentaries are yet another way to introduce social issues into ELT. A prime example of a documentary appropriate for English language learners is He Named Me Malala (2015) directed by Davis Guggenheim. For its great part, the film presents the events leading up to the Taliban attack meant to take Malala’s life. In doing so, it paints an intimate portrait of a young girl who, influenced by her father’s beliefs, stands up against injustice and becomes a globally recognised advocate for girl’s education. Being just a 15-year-old girl on the day of the attack, Malala can become a role model for many teens all over the world. Hopefully, by the end of the session devoted to that Pakistani girl and her life, students realise that there are many similarities between each of them and Malala. This will empower them to follow in her steps and take action to support a cause they feel passionate about.

Last but not least, short inspirational videos have the power to facilitate “difficult discussions” in the English language classroom. The Conditioned (2014) directed by Michael Marantz tells the story of how a homeless poet’s life gets forever changed when he meets a woman who does not walk by indifferent. The name of the poet is Raimundo Arruda Sobrinho and the name of the woman, Shalla Monteiro. After reading some of Raimundo’s poems, Shalla created a Facebook page through which the world could experience Sobrinho’s writing. A session based on this short film could involve students in a variety of tasks which aim at developing high levels of empathy in the students and at making them understand that being homeless is not a choice, and that all of us are more vulnerable than we might think.

Overall, regardless of its genre, film opens new possibilities not only inside the English language classroom, but also outside of it. It encourages prosocial behaviours in students and develops their sense of justice, and encourages them to create a more inclusive society.